The wiki format allows anyone to create or edit any article!

If you wish to contribute please look over the Wikia's New User tutorial in order to keep consistent formatting, you can also ask a bureaucrat for help.

Give me a run down 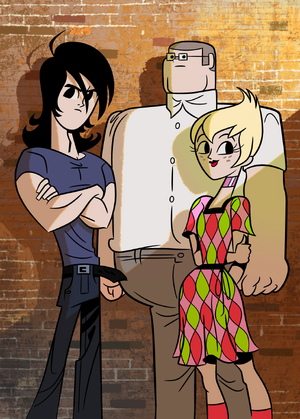 The series focuses on a trio made up of the alien princess Ilana, the rebellious soldier Lance, and the robot Octus; the three are able to combine to create the titular Sym-Bionic Titan. A preview of the series was first shown at the 2009 San Diego Comic-Con International,[1] and further details were revealed at Cartoon Network's 2010 Upfront.[2][3] The series premiered on September 17, 2010, and ended on April 9, 2011. The series is rated TV-PG-V.

Cartoon Network initially ordered 20 episodes; Tartakovsky had hoped to expand on that,[4] but the series was not renewed for another season, as the show "did not have any toys connected to it."[5]

Billed as "an exciting hybrid of high school drama and giant robot battles", Sym-Bionic Titan features "the adventures of three beings from the planet Galaluna who crash-land on Earth while attempting to escape their war-torn world." The series follows the lives of Ilana, Lance, and Octus, two alien teens and a robot in the form of humanoids who arrive on Earth, an "identical" planet to Galaluna, while fleeing an evil general who has taken over their home planet with the help of monstrous creatures called Mutraddi.

The three main characters include Ilana, princess of the royal family; Lance, a rebellious but capable soldier; and Octus, a bio-cybernetic robot, all of whom must now blend into everyday life in Sherman, Illinois. Posing as high school students, Lance and Octus work to conceal Princess Ilana from General Modula and his hideous space mutants sent to kill the sole heir of Galaluna. When called into battle, the Galalunans are outfitted with individual armor that provides more than ample protection. It is when the gravest of danger appears that Octus activates the sym-bionic defense program and he, Ilana, and Lance unite "Heart, Body and Mind" and come together to form the spectacular cyber-giant Sym-Bionic Titan.
Characters

Learn more about each episode

Latest Activity
Track the most recent changes to the wiki on this page.

No changes during the given period match these criteria.
Watch 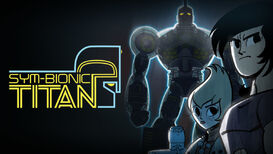 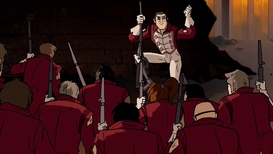 Sym-Bionic Titan's 2nd run on Toonami is over, however, now is the time to help the Galaluna Resistance!

We are working on a proposal to send to Turner/Cartoon Network and we need your help.

A few months ago Fandom announced they would be rolling out a new theme for Fandom Wikis. This new theme, called FandomDesktop, now has an opt-in opt…

Guys! Did you know about this video?

We got some news about it !! (for genndy´s words)

Recommend see de whole video but if you want you could go to 27:00 He talk about t…

It looks like Adult Swim has finally removed Sym-Bionic Titan (& Beware the Batman) from it's available VOD page here & here. This means the only leg…

SBT has been written off

Well this came as a bit of shock, posted on the Toonami Tumblr page on September 22nd, 2014 at 3:41pm Sym-Bionic Titan & Beware the Batman have been …

Help Sym-Bionic Titan Get Another Season

Buy SBT (Only in Standard Definition)

A few months ago Fandom announced they would be rolling out a new theme for Fandom Wikis. This new theme, called FandomDesktop, now has an opt-in opt…

What happened to the SBT Community?

Hello everyone, I already watched the entire Sym Bionic Titan episodes cartoon last month and I just came by to see how the fandom is going. I have s…

Hey guys. I was looking through some of the blog posts and noticed there wasn't one for a plot ending. So here's my take on how SBT might have ended …

Community content is available under CC-BY-SA unless otherwise noted.
Advertisement