The Galactic Guardian Group, also known as G3, is a non-government based security agency that does research on extraterrestrial life forms, and whose goal is to protect the earth from any intergalactic threats. They are the primary Earth-based nemesis of Lance, Ilana, and Octus. In the episode Escape To Sherman High, the Galactic Guardian Group has weapons more advanced compared to those the military uses, such as the Wave Motion Cannon.

In the episode The Fortress of Deception, more is shown about G3. Lance and Ilana are kidnapped and taken to the G3 headquarters, a giant hovercraft. During their time there, the secret G3 has been hiding is revealed: G3 has investigated and monitored every action Titan has done. This secret, coupled along with a quote from when Solomon told Ilana, "You must be an alien, or someone made a huge mistake" shows that G3 isn't just any ordinary organization.

It is unknown whose side they are on, but more secrets are yet to be unveiled. The organization is led by a mysterious cyborg, who calls the shots and gives orders that are carried out via Solomon, the G3 field commander.

After Steel tried to destroy G3 and Titan was revived in the final episode, G3 was forced to go into hiding and has seemingly dropped off the map, as their flying headquarters vanished.

Their level of technology is similar to that of Galaluna. Their main headquarters is a massive airborne vessel in the sky. The technology they utilize include:

G3 Soldiers in The Fortress of Deception

G3 ship in The Fortress of Deception 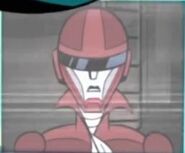 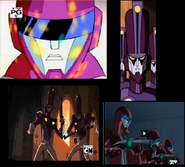 Retrieved from "https://sym-bionic-titan.fandom.com/wiki/Galactic_Guardian_Group?oldid=18720"
Community content is available under CC-BY-SA unless otherwise noted.